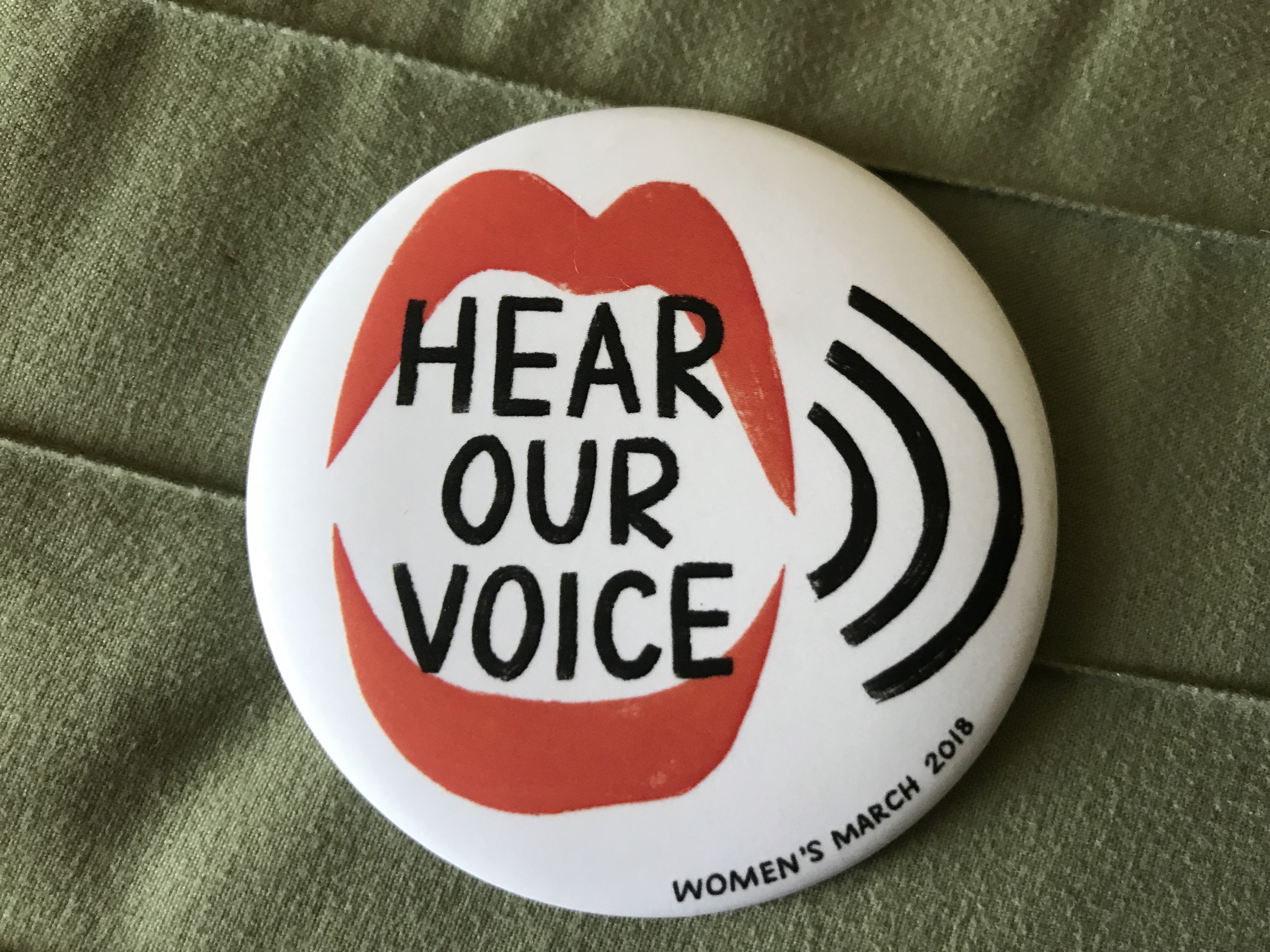 This morning, as I grabbed a seat in my Sunday school class, a man stopped as he walked by to read the button on my purse. With a quizzical look, he read, “Hear Our Voice” and looked up to me for explanation. I happily stated, “it’s from the women’s march a couple weeks ago.” His eyes grew wide, and he literally started to back away from me saying, “have a nice day” as he turned and walked away. Like a big alarm had gone off for him, blaring “Do Not Engage!!!”

Many thoughts went through my head as I watched him flee in fear of me. Deep sadness at knowing I was, yet again, judged for being a “liberal” in this conservative town. Amusement at his discomfort. Grief that the conversation hadn’t continued because it could have been an awesome one. And the resigned exasperation of yet another woman who rarely gets a chance to be heard in the church, to explain herself, to be taken seriously. I thought, if I’d had a husband standing by my side, the conversation probably would have gone on much longer and perhaps could have even led to greater mutual understanding.

As a woman in the evangelical church, my role is limited already. I cannot be in leadership positions over men, can’t be a pastor or elder, apparently can’t even serve communion at most churches. Many churches who allow for women to be deacons will only have a couple, and they’re usually the heads of children’s ministries. Female representation is rare as these churches are usually led by all-male elder boards and sermons are taught by all-male pastors. A female perspective isn’t included in this picture. Yeah, they might run some things by their wives from time to time, but the vast majority of day to day decision making and sermonizing is from an entirely male perspective. It’s not that they’re trying to preach from a male-oriented view, it’s that they don’t even realize a different view could exist in the church. Their way of teaching, their way of reading, their way of applying the Bible is the right way. The idea that women might see things differently, yet still be biblically accurate, would seem heretical.

I’m not going to get into a complementarian vs egalitarian debate in this post, as that’s not the point. Whether you believe female leadership is biblically okay or biblically forbidden is another matter entirely. I’m just stating that much of the evangelical church has this hierarchy in leadership, and women’s voices are pretty low down the ladder. Here’s my added argument: that the voices of single women are even lower still.

As a woman without the headship of a husband, I can be seen as a threat. I don’t have a husband to reign me in, to filter my thoughts and speech. Adult single women in the church can even be seen as dangerous, like talking to us can be risky. Risky for the wives, because our independent ways might rub off on them. Risky for the husbands, because we single women must be on the hunt for a man so might try to seduce them away from their marriages. Risky for the church, because we might be upstarts and rebels.

While women in general often do not merit the level of respect in the church that men do, single women get even less. Married women can be respected because of their husbands, that association protects and lifts them up. After all, in many evangelical churches today, the highest calling for a woman is as wife and mother – so if you’re fulfilling this calling, you have earned honor. And while I agree that being a wife and mother can be an epically awesome way to glorify God, holding it up as the gold standard over the heads of those of us who just can’t quite seem to get married or have kids, who aren’t the perfect little homemakers, is a pretty horrible thing to do. Sorry, but we can’t all be the Joanna Gaineses of the world.

Single men can suffer voicelessness to a certain level as well, for they can be seen as irresponsible and immature. The mark of a Real Man in the church is often that you are husband and father, and if you don’t fit this mold by a certain age, you need to “be a man” and “settle down.” Though single men are much less likely to actually be hired by a church than their married counterparts, they are still more likely to have positions of influence than any woman, married or single, and single women are definitely the bottom of the barrel.

There are individual churches that work hard to hear women’s voices, even those of single women. I’ve been lucky enough to be part of churches like that. But this seems to be the exception more than the rule.

Two weeks ago, as I stood side by side with almost 600,000 other women in the streets of Downtown Los Angeles, I felt like my voice might actually be heard. Yes, I am different from many of the women there – I am a Christian feminist. But the response to my sign was 100% positive, with many people commenting on it, wanting pictures of it, and telling me they were just like me, were glad I was there, or were so excited to see that represented. Surrounded by women who often feel voiceless, and men and children who wanted to give us the chance to be heard, was a profound and beautiful experience. But no one in the church will discuss this with me. No one will even ask about it. No one from church commented on my social media pictures, no one asked questions, no one even tried to debate my going. Because what does it matter? I’m just one single woman. My thoughts and ideas don’t make a dent in the church.

I realize this post is a bit more emotionally charged than usual – it is not researched and backed up by Bible verses. But guys, I’ve got to tell you, it’s incredibly demoralizing to feel silenced over and over again. To feel like the very church I’ve grown up in, been educated in, have served and ministered in, and thrived in often sees me as someone to be silenced, or maybe just ignored.

I’ve considered, very seriously, just leaving the modern evangelical church altogether and seeking out more progressive pastures, as most of the single women bloggers and writers out there have done. I get the appeal. I’m drawn to it. But my heart, and my head still belong to the reformed church. This rebellious liberal is actually quite theologically conservative. Shocking, I know. So I can’t bring myself to jump ship. Besides, if everyone who is struggling with the post-Trump views subtly (or obviously) infusing the American evangelical church today leaves, what will become of it? If we all run away, will we not be partially complicit for allowing these poisonous views to grow and thrive?

Or maybe this feminist Christian will just chuck it all and move somewhere I can happily be a liberal Christian, drink wine with communion, and go to women’s marches with a whole truck load of my fellow church-goers. Who knows.

For now, I’ve decided to be a gently squeaking wheel in the machine I’ve so loved. Maybe, just maybe, if I’m at my new church a little longer, make more friends, get more involved in ministry, maybe, just maybe, my voice will be heard. Maybe, if enough of us speak up, if enough single women share our concerns with love and grace, the church will take us more seriously. Maybe, if we stick around trying to help the vulnerable, lift up the weak, and love the least loved in policy and practice, the church will follow our example. Yeah, we’re not supposed to be in leadership, but persistent examples of Godly love for others are hard to ignore.

To all the non-singles in the church, I challenge you to listen. Just listen. Ask your single brothers and sisters in Christ questions and listen to their answers without trying to “solve” their concerns. If you are in leadership in a church, ask yourself how you can give single women a platform, how you can help them grow and teach and speak and minister. Find ways to involve women in the decision making aspects of the church. Run sermon ideas by women to see how they’ll come across to the other half of the audience. Get creative. Consider that only getting input from those who represent 1/2 the congregation might not work. Consider that single people have as much to offer the church as married ones. Just ponder the possibility. Start there.

My challenge to all the single Christians out there is to make your voices heard. Become so involved in the ministries and day to day lives of your churches that they can’t help but listen. Help peel away the prejudiced views that have been built up over decades regarding the value of singleness in the church and in the world. Do not allow yourselves to be silenced, but with humility and grace, keep speaking.

I end this post somewhere between heartbreak and hope.

8 thoughts on “The Church’s Silencing of Single Women”