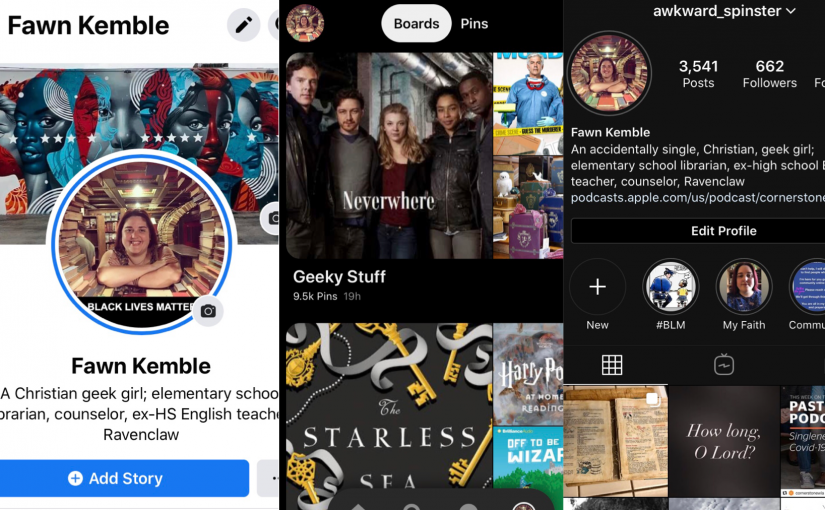 I was going to start a 5 part blog series on ways to embrace prolonged adult singleness, but to be honest this week isn’t the week for it. Hurricanes, fires, over 180,000 dead of Covid-19, police still shooting Black men, the murder of protesters by a white nationalist teenager, so many lies each day of the RNC that it’s dizzying, and the constant barrage of white evangelical Christians online arguing on the side of violence, selfishness, greed, hate, ignorance, and hypocrisy has left me with little to no mental, emotional, or spiritual space for that right now. I’ll get to it because it is important, just not today, not this week.

Instead, I’d like to explain how I try to interact online in the insane world of 2020 social media. This is what I strive for, but to be honest, I constantly fall short. As a single adult in the 21st Century, a lot of my community has been facilitated via social media sites long before Covidlife made that normal. When you live alone or just with one other flatmate, and when you have a lot of friends who live in different cities, states, and countries who really are more like family, connecting online is an incredible blessing.

I don’t have a Twitter account anymore because I tried it for a year a couple years back and it just stressed me out. I already struggle with feeling the need to know everything that is going on in the world, so having that much information at my fingertips every second was overwhelming. I know I’m missing out on some awesome things, some beautiful and clever communities, some networking opportunities, etc. but I can’t do it. That’s a personal choice, you’ve got to make those too. But honestly, feel free to just delete an entire platform if you don’t like what it’s doing to you.

What I do have is Instagram, Facebook, and Pinterest. Instagram is my favorite because I’m a visual learner and photography is a hobby of mine; I studied it in high school and college a bit, my first job was a Sears Portrait Studio photographer, and I love seeing people’s lives through a visual medium. In the past few months, I’ve added more of my political views into my Insta account, especially through my Stories. With stay-at-home due to coronavirus and the lack of contact I have with other humans, social media is one of the main ways I can let others know that there are indeed real true Christians who disagree with the way the current administration sees the world, who know that Black Lives Matter and aren’t afraid to stand up for them. It’s not a Private account, so anyone can follow, but I do Block people who get weird.

Pinterest is my silly space to pin pics of all things geeky, Anglophile, and bookish as well as find recipes and keep track of my reading. I’ve been in that space for years, and really enjoy it. Before my school closed the school library this year and I lost my job, it was also a great place to find ideas for bulletin boards, lesson plans, and activities. This space is still just a fun one for anyone to check out.

Facebook is my most troubled online existence, but still remains the main way I can keep up with some of my dearest family and friends. It’s also where a lot of you, my readers, find my blog. FB, for me, has always been the main space I post any political or social thoughts, so be warned. I also only add people as Friends who I actually know in “real life” or know of well enough to trust on FB. So if you try to add me and I don’t know you, it probably won’t work, but a lot of what I post is public so you’ll still be able to see some of it.

When I lived in Los Angeles, a much more liberal city than the one in which I currently live, I never blocked anyone on social media unless they got truly pervy or creepy. I figured that, since I lived in a pretty liberal area, I shouldn’t limit my bubble, so I kept a pretty even balance of conservative and liberal friends. As an alum of both UCSB and The Master’s College, as a person who has lived most of her life in either LA or the AV, as a woman who has spent many months in other countries and continents and experienced worshiping in churches that look quite different than the typical white evangelical one, my friend and acquaintance list is incredibly diverse. I used to want my daily FB feed to echo that. But since moving back to the AV and working at a Christian school, my tolerance for that balance has decreased. Most of my in-person life was surrounded by the white evangelical Christian bubble, where I never quite fit, so I needed a slightly more liberal bubble online to keep me sane. So here are some of my online rules to help keep my sanity and some semblance of balance:

So why do I bother saying anything online that isn’t all joy and happiness? First, there is such a thing as Toxic Positivity that claims everything is okay and we should just have a positive outlook and it’ll all get better. Which is neither biblically or demonstrably true. Second, I think it is incredibly disrespectful to the families and friends of people who have died from Covid-19, or Black Americans fighting for their very right to live, or others who are genuinely suffering to pretend everything is normal. Things are not normal. And, as a follower of Christ, I believe I should follow the advice of King Lemuel’s mother as recorded in Proverbs 31:8-9:

So I try to create an online presence that looks an awful lot like me, like my real life. A weird balance of pictures of my dog, activism, my niece and nephews, nature, my mum, books, mixed with scripture, articles, memes, comics, and other random stuff. I’ve never been one to shy away from being open and authentic, so you’re going to see that in whatever space we meet.

I was a high school English teacher for 8 years of my life, so a lot of the people who follow me online are former students of mine, now incredible young men and women in their 20’s and even early 30’s (gasp!). Many of them are young men and women who are struggling with the current state of America. Though I’m no longer their teacher, they are still and forever will be My Kids, and I feel a responsibility to them as well as any other people who follow me online, to do all I can to stand up for what is just and right and good. Don’t mess with my kids!

Here’s the downside – I fail at this. A lot. I’ve argued more than I should. I’ve ignored comments I shouldn’t have when I was tired or just over it. I’ve reposted things with the wrong intentions – just wanting to get my thoughts out there without actually thinking how it would affect others. I’ve hurt friends inadvertently by posting things that pain them. I’ve said too much or not enough, spoken about the wrong thing in the wrong moment, been insensitive or arrogant. I know of at least 2 relationships at the moment that I need to figure out how to repair, if possible. I am imperfect, but I am trying. And, by God’s grace alone, I am growing. So, please have patience with me in all my various versions, I’m trying.

How do you guys deal with your online realities?
Any tips that have worked for you?