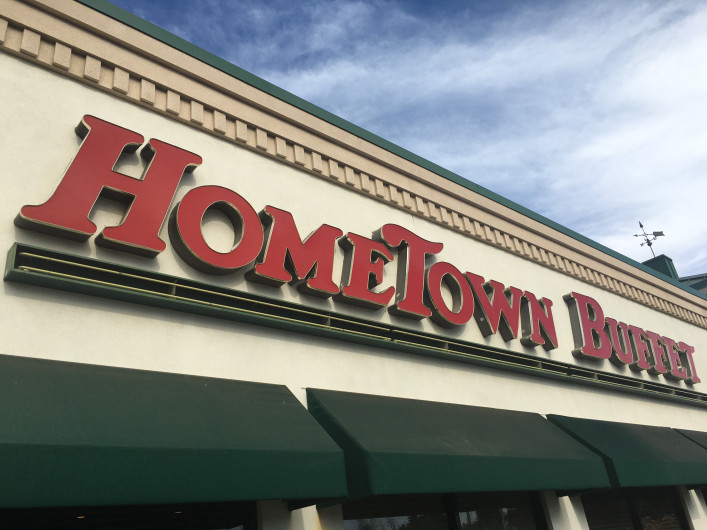 On my way to work this morning, I drove past the long-defunct Hometown Buffet. It closed down ages ago, but this time it was in the midst of being gutted. Walls were smashed by large machinery, insides exposed in the process of being laid to ruin. I’m sure the no-longer-with-us Toys “R” Us next to it will be next.

Glancing out my window and seeing the red and green sign still hanging on, declaring “Hometown Buffet” over wreckage hit me out of nowhere. I went from benign coffee drinking and podcast listening to brushing tears out of my eyes. My heart did that little skip, that almost-hurt. It came as a surprise.

In that second, memories of my long deceased grandpa flooded in. Birthdays and Father’s Days spent heaping plates full of meatloaf and limp salad, looking forward to soft serve ice cream with sprinkles on top were brought to mind. Thoughts came of joking with my brother and sister about how only old people ate here, about how mediocre the food was, about the birthday song played over speakers.

And my grandfather? Man, he loved that place. A typical WWII Veteran of “The Greatest Generation,” he desired the most food for the money. Even though he didn’t actually eat much, and barely ate meat after a stint working in an abattoir in his younger days. But as one who lived through the Great Depression, he couldn’t bare to see food go to waste – thus his love of a buffet.

My grandpa (my mom’s dad) was my last living grandparent, and the one to whom I was closest. He told me I was like him, that I had inherited his wanderlust which led him to enlist in the Navy, then to move around Southern California from place to place in his RV when my mom was a little girl until retirement.

He passed away about one year after my dad. That was a tough year as he was in heart failure for much of it and couldn’t get around much. He fell a lot. We sold our old house and bought a new one, moving him in with us (mom and I, and Josh on the couch during summer break from university). Lavender got married to one of my best friends and grandpa got to be there. Greg had my first nephew, Graden, a gift from God, my father’s first grandson he never got to meet. And grandpa died.

All of these memories flood back just from one building in the midst of being gutted. Grief is a funny thing. 16 years later, and it can still ambush me. But I don’t mind, not really, because these memories make me smile through the tears. I’m reminded of my grandpa’s deep and eternal love for me and all his grand-kids. Grief has somehow softly transformed over the years, and by the grace of God, into an old friend who comes to visit, bringing all the memories with them, but not staying for long.

To my friends experiencing grief that is much more fresh and raw, know that God is with you in it. Our God is a God who can lift up the downcast, he is the God of steadfast love (Psalm 42). Hope in him, and know that someday the ambushes of grief will be softer, bringing joy instead of pain.

4 thoughts on “A Sudden Ambush of Grief”