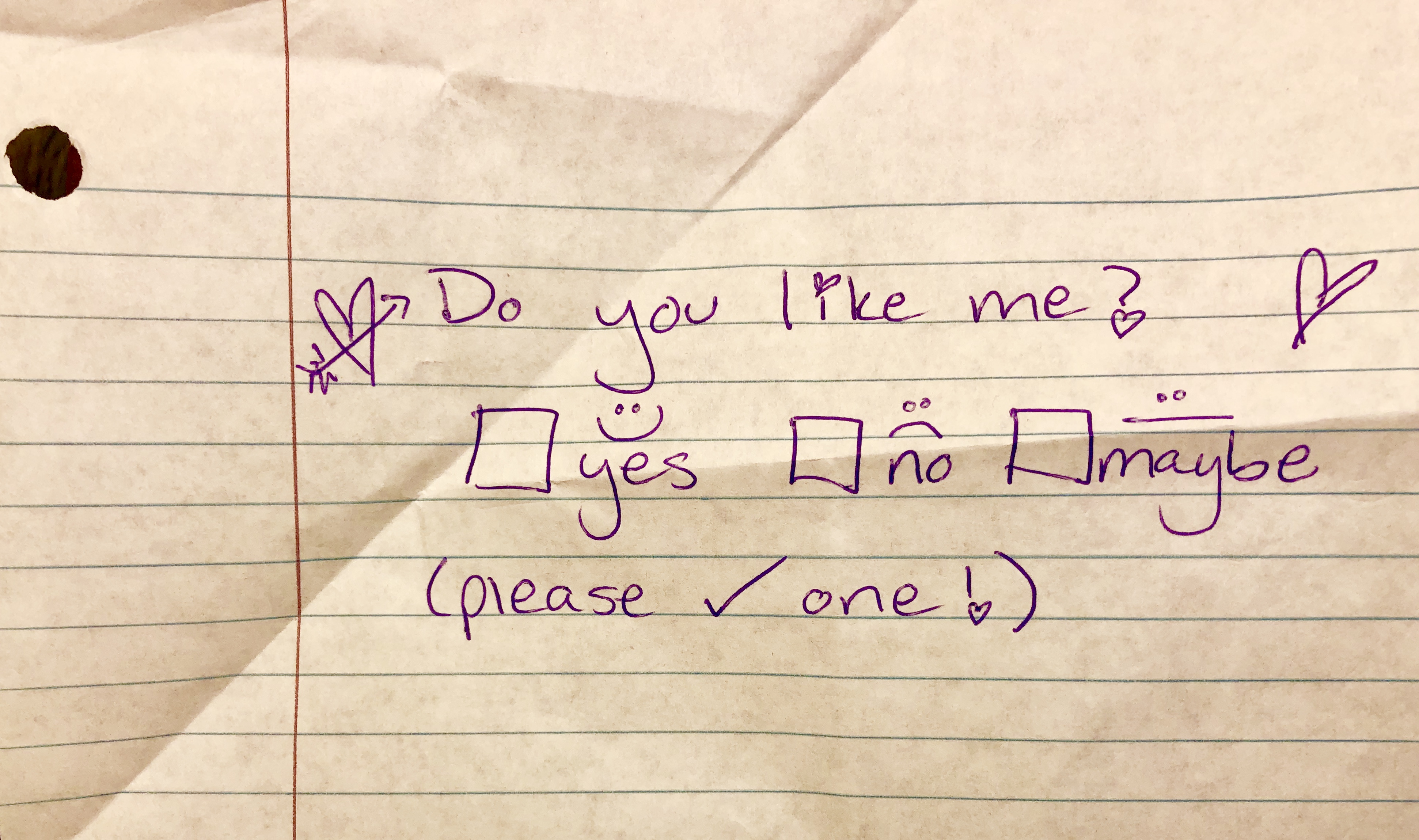 I think my dating life peaked in middle school. In those magically awkward years from 6th to 8th grade, I had 4 boyfriends (consecutively, not simultaneously). The magic of middle school boyfriends, at least at a Christian school in the 80’s, was that very little was required. You’d tell your friends you liked a boy, then would send an envoy to his group of friends to find out if it was mutual. Short notes would be exchanged, either passed from friend to friend or shoved in their locker, often with boxes to check, folded in elaborate ways, and possibly with hearts over any i’s. Once you had assurance that you were liked back, you’d be “going out” or “boyfriend and girlfriend” or whatever phrase was in that week.

For me, a good little girl, this pretty much just meant eating a few lunches together (not all of them, we still wanted to spend most of our time with our own friends), exchanging cheesy gifts on Valentine’s Day, having our parents drop us off at the movies (also with groups of friends) and holding hands. The Couple’s Skate at the roller rink was the pinnacle of relationship status, and I think I only got there once, which was stressful as I wasn’t a very good skater so holding hands made me much more clumsy. There was one Disneyland trip filled with fabulous moments (hugging in line!) and incredibly awkward ones (when you’re bigger than your boyfriend but he still wants to sit behind you on the roller coasters, so you spend the entire time holding yourself up for fear of crushing him). Other than this, very little effort was expended. These “relationships” tended to be short-lived, and ended rather amicably due to them moving away, school ending for summer, or just disinterest on both sides. And that, it turns out, is the most successful I’d ever be at relationships in my life.

High school was a barren landscape in the world of dating for a geeky girl like me, banished to the status of “Friend Fawn.” I had 3 boyfriends between my 18th-25th years, one of whom broke my heart – not romantically, but because we had been close friends and dated on and off for years as I grew closer to the Lord and he grew further away. I even had one marriage proposal. These relationships were more complicated and stressful than I would have liked. With the good, and there was indeed good, came a painful amount of bad.

After that, I got to the point in my life where I felt I was probably ready to date seriously with the future possible goal of marriage, and this was confirmed by many mature Christian mentors in my life. I know men and women who struggle in their singleness because they are constantly being asked on dates, are constantly pursued. Just a head’s up – I am so not that person. For me, there was nothing. From 25-38 I was open to dating, and some of those periods pretty actively tried to date (ah, the brutal world of internet and app dating!), yet in that entire time I was only asked out by 2 men. One from an online dating site, another a few years later from a dating app. Both of those turned into one-date-only (by my choice) kind of situations, for very good reasons I won’t go into here.

I was not “being too picky,” I was literally only asked out by 2 men in 12 years. Yup. God was not a fan of me getting married. During those 12 years, I spend some time on and off struggling with doubts about myself. Was I too fat? Too opinionated? Too independent? Did I wear the wrong clothes, have the wrong hair, need to learn how to put on makeup for more than just special occasions? Was there some horrible character flaw that was off-putting to the universal race of men of which I was horribly unaware?

I felt like I was supposed to expend time and thought on what photos I posted on the apps, which men I reached out to, which social events I attended – all with the goal of marketing myself in the best way to get a man to see me as more than a potential friend. After all, I had heard repeatedly that if I wanted a husband, I couldn’t just sit around and wait for them to show up. Yes, I had to trust God, but I also had to make sure I was “putting myself out there,” whatever the heck that means. It’s not like I’m a hermit, never hanging out with guys. I actually had a lot of male friends and my church at that time had a pretty active group of friends filled with singles my age. I even had a friend tell me I was still single because I wasn’t sending out positive vibes, I wasn’t “naming and claiming” God’s plan to bring me my soulmate. She was right, by the way. I don’t really have positive vibes; I’m a cynic and struggle not to see the world as going to hell in a hand-basket. And I can’t bring myself to “name and claim” anything that is not an explicit promise of God. Guess what, a soulmate is not promised to anyone.

But the main thing is, as much as I yearned for a partner in life, as much as I crushed on many a man, I never actually wanted to spend the emotional or mental effort on making myself attractive for some possible dream man. There were so many other things on which to spend my limited human effort! I wanted to help people, to learn more about the Bible and God and how I could use what I knew to counsel those in pain. I wanted to see the world, meet and make friends wherever I went, and try to leave places a little better off than when I arrived. I had students to care for, lesson plans to write, incredible books to read, wonderful friends to pour into (both men and women), ministries to help flourish, a family to love, new places to visit . . . an endless list of things I’d rather spend my time on than trying another diet, switching out profile pics yet again, swiping right, or waiting for some guy to maybe, possibly, for once stop just texting and actually ask to meet me IRL.

I also didn’t like who I became during those seasons in which I was more intent on trying to date. It was depressing, and I am prone to depression as it is. I spent too much time thinking about myself and what was wrong with me. How come friend after friend kept finding boyfriends, getting engaged, marrying, having kids, and I was still just single Fawn, scraping by alone? What was wrong with me?

Realizing that what is wrong with me happens to be the exact same thing that’s wrong with every person – I am a sinner in need of a Savior – was incredibly freeing, because I happen to have a Savior, so that’s taken care of. I recognized that I could look at all the women in relationships around me and compare myself to them to try to figure out why I didn’t get chosen and they did, or I could look and notice how many of them were just normal women, actually a lot like me. If you look closely, you’ll see that men marry skinny women and overweight ones, quiet ones and loud-mouthed ones, younger ones and older ones, selfish ones and generous ones, needy ones and independent ones, optimistic ones and pessimistic ones. All kinds. And when I looked at others who were still single, like me, I realized how many of those men and women were pretty kick ass. It’s not like those of us who are still single are all pathetic, ugly, socially inept people. We’re all pretty darn normal, oddly similar to married peeps.

So, at 38, I decided to scrap the whole trying to date thing entirely. Yeah, in the depths of my heart I’d still love to get married – but God really is going to have to bring the man to my doorstep because I’m done expending any time or energy on that at all. Who knows if I’ll always feel this way, but after 2 solid years of this attitude, I feel more content and free than I ever did when I was yearning to date and get married.

Instead of worrying about posting a certain picture because it might be unflattering, I can just post whatever reminds me of a joyful moment in time. Instead of wondering why only creepy men or old guys who want me to marry them for a Green Card click on my profile on some app, I can spend my phone time messaging my writer’s group, listening to podcasts, and clicking “like” on my friends’ adorable pics of kids and pets and all things geeky. It’s rather stress-free.

Even better, I’m not going through the emotional roller coaster of the will he/won’t he see me as more than just a friend. I don’t have the first date fears (Will he see me and just leave? Will he be a douche-bag? Will he be a true Christian? Will he be terribly boring with no chemistry? Will he try to molest me?). When I meet men, I can truly enjoy getting to know them as friends with zero pressure for anything more on either of us. And let me tell you, friendship is not a secondary status of relationship, but is beautiful and valuable.

And, when I think about myself, I don’t have all those doubts about what’s wrong with me. I can look to Scripture to find out how God sees me, to know in which areas I should grow, where I need to repent, where I need to seek advice or accountability. I can do this while knowing I am unconditionally loved. There is no need to even try attaining some imagined standard of womanhood, to try to be Perfect Christian Wife Material. Instead of feeling like I’m missing something, I know I am whole. I am exactly where God wants me to be in my life and I no longer need to second guess that, to feel like I’m missing something.

I realize this isn’t the message many single men and women want to hear – I probably didn’t want to hear it when I was younger and still trying to date. But when you get to the point in your life when you might be ready to embrace your singleness on a more permanent basis, let me encourage you that there is deep freedom to be found there. Freedom to spend your emotional and mental energy on loving God and loving others in a profound way. Freedom to be loved and served by God and your sisters and brothers in Christ as you realize how much you need them. Freedom, by the grace of God who has special care for the lonely, to be single, confident, and happy.

10 thoughts on “The Freedom of Not Even Trying to Date”