I have a cold. Which means this week, I spent quite a bit of time after work on the couch or in bed and way too much time on social media. And, during one of these online binges, I came across this brilliant tweet by Rachel Held Evans: 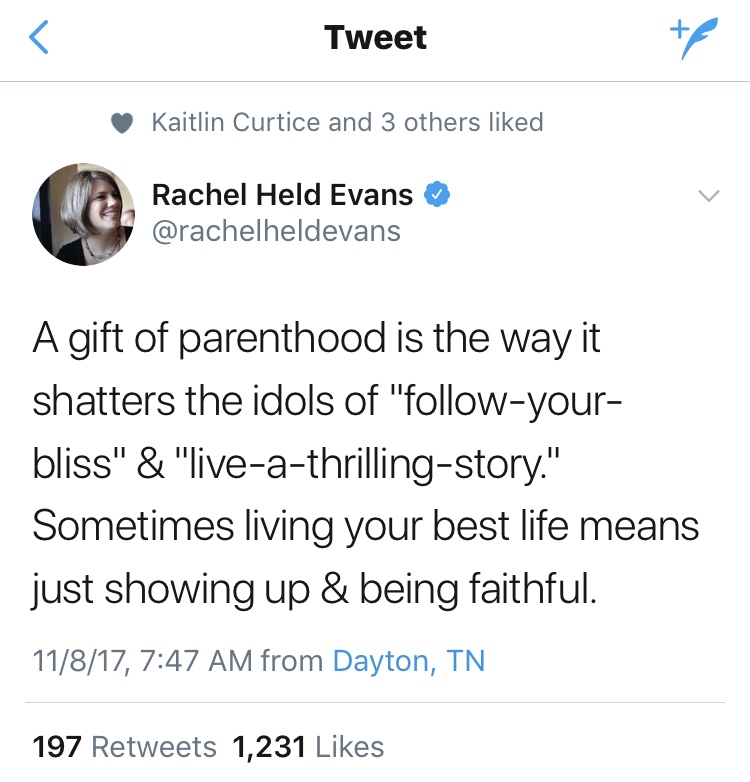 I read this and thought, in my sinus congested brain, this makes a lot of sense. I also thought about what things in my life helped shatter the “follow-your-bliss” and “live-a-thrilling-story” idols I’ve had. And I loved her last line about “just showing up and being faithful.” So many Amens to that.

And then . . . well, then I made the mistake of reading the comments. While most of them were awesome or at least innocuous, there were the usual few that took this principle one step further and turned it into something along the lines of “parenthood is the ONLY way or the ULTIMATE way” these false life goals are routed out of us. As a single woman who already struggles with the awkwardness of not having kids, this line of reasoning never ceases to disturb me. As if God only uses one method, the same method, to help each and every one of us grow. As if raising children is the only way, or even the absolute best way, to stop believing a false narrative of personal fulfillment.

One of my pet peeves as a single woman in the church is how often I hear these messages; these “truths” build up one type of person while putting down another, usually inadvertently. By changing just a word or two, from “a gift of parenthood” to “parenthood is the one and only way, or the best way,” this beautiful idea becomes a patronizing way of saying that parents are able to be more sanctified than non-parents, in this area at least.

Let me paraphrase a few of the comments to show you what I’m talking about:

Since the vast majority of Americans have children by the time they’re 45, making statements like this may seem insightful at best and harmless at worst. But for the rest of us, those of us without children, declarations like these leave us out in the cold. If parenting is the best, main, or only tool God uses to teach his children that the “follow your heart” ideal is horribly flawed and rather being faithful in the little day to day things can truly give us our best lives, then all childless adults are doomed to live lesser lives with that false bubble still intact.

The thing is, that’s not true, is it? We’ve all met parents who still firmly believe the lie Rachel Held Evans exposes, and we all know single people who don’t buy into it. Sanctification is not limited to parents.

Instead of perpetuating this common idea that parenting is some magic formula to sanctification, we should be focusing on the fact that God can, and does, use all things in our lives to grow us more like Christ.

Paul, assures the church at Philippi “that he who began a good work in you will bring it to completion at the day of Jesus Christ” (Philippians 1:6).

In Romans 12, he discusses how all followers of Christ should present our bodies as living sacrifices to God. He goes on to explain how we are many members of the same body, all of whom have different gifts, but in whom the Holy Spirit is working. Parenting doesn’t even come up because it is merely one of the many tools God can use to help draw us into his vision for life.

Here are some other ways the “follow-your-bliss” and “live-a-thrilling-story” life goals are often revealed to be empty objectives in life thus far, none of which include raising a child.

When someone you love dies, it takes everything in you to just show up and be faithful because you can’t do anything else. The thrilling story of my life as I saw it was supposed to include my grandparents, friends, crush, and father a lot longer than it did. Grief does not allow the “follow-your-bliss” narrative to continue because it strips your bliss away, revealing what’s underneath. Hopefully, revealing faithfulness and love.

It’s hard to live a thrilling story when every step you take is excruciatingly painful. Sometimes we have to cancel our exciting single and carefree plans when, instead of jumping on the airplane for which we have a nonrefundable ticket, we end up in the emergency room unable to move due to a back injury. In moments like these, or lifetimes for those who suffer from chronic pain, just showing up is the hardest thing in the world. When all of one’s strength is taken by not giving in to despair, faithfulness is all that’s required of us.

One comment on Evans’ tweet highlighted that this idol of following our hearts and leading exciting lives is one only the financially stable can afford to have. They point out that this dies pretty quickly when you have to work multiple jobs just to scrape by to pay the bills. As someone who grew up quite poor and is currently working 3 jobs just to cover my necessities, I agree. There isn’t much thought to “bliss” when you’re just doing what you have to do to get by.

Being Part of a Church Family

God uses his children to help each other grow. It doesn’t take a toddler to teach patience, or a sick child to teach selflessness. God can and does use everyone around us. For parents, yes, this means he will use your children and spouses an awful lot, as well as your coworkers, friends, family, and church. For those of us without kids, he’ll use everyone in our lives too. If you’ve ever been part of a church family, you know how hard that can be. Just showing up and being faithful is my mantra these days, because so often I don’t even want to show up.

One of the best ways to realize the emptiness of a self-focused life built on the idea that we can be fulfilled by chasing our own pleasure comes from trying it out for awhile. Many a soul has pursued this very goal, seeking the thrilling life of adventure and running after whatever brings immediate gratification, only to find it hollow and unfulfilling. Jesus uses one such story, that of the wealthy young man who gets his inheritance early and leaves home to chase pleasure, only to return to his father as a lost prodigal, destitute and miserable (Luke 15). For those of us who don’t want to figure this out for ourselves, we can learn from reading parables like this, and stories depicting this truth over and over again in great literature and history.

Singleness, in and of itself, can be a testing ground for this idea. When so many of us have future dreams of falling in love, getting married, and living an adventurous life with our partner, our prolonged or permanent singleness can be the greatest teacher. We either must re-frame our idea of a successful life, or live in bitterness. Most people I know who have been single for a long time learned awhile ago that “just showing up and being faithful” is the only way to be content, the only way to see what God has for us rather than what we wanted for ourselves.

There are a million other way in which God is working in all of his children, whether parents or not, married or single, to conform us to his image. Please don’t fall into the trap of believing or causing others to believe he has the same way of doing this for everyone.

It might seem a bit nit-picky, but for singles and those of us without kids who hear this rhetoric All The Time, it adds up and can get into our heads. It can also get into the heads of parents, Christian professors, and pastors – like their adult children, students, and parishioners won’t be quite sanctified enough until they are married and have kids of their own. Let’s be careful about what we are saying, because it seeps into what we believe and can eventually lead to entire churches and groups of Christians believing false theology. Let’s give hope to every follower of Christ that God can and will work in them, using the varied tools he so chooses, to help them fulfill their calling.

6 thoughts on “The Lesser Sanctification of the Childless”